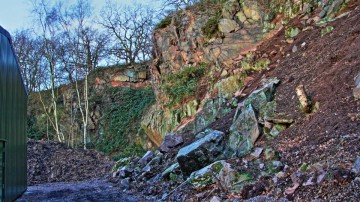 This area of Leicestershire including Beacon Hill, Bradgate Park and Swithland Woods has a very interesting geological history. The old Nunckley Hill quarry has been designated a RIGS site (Regionally Important Geological and Geomorphological Site) due to the interesting rock faces around the perimeter of the quarry. The rock is over 400 million years old and was created by volcanic activity in the area.

The exhibition building provides additional display space, with displays covering the Geology of Charnwood Forest, quarrying at Mountsorrel, and the history of the Mountsorrel Railway, including the story of its restoration. Our initial displays include :-

The construction of the exhibition building has been funded by a grant from Tarmac’s Landfill Community Fund together with match funding donations from the public.