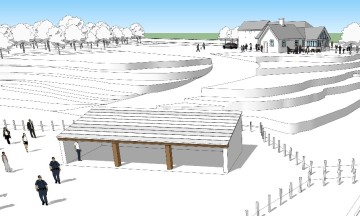 An important feature of the site is the old Nunckley Hill granite quarry. This was a small quarry worked between 1896 and World War I, before eventually closing in 1922.

An area in the base of the quarry has been set to show how granite quarrying took place in and around Mountsorrel 120 years ago.

A feature of the main quarry at Mountsorrel were the Stonemasons’ huts that circled the outer rim of the quarry. There were well over a hundred of these huts, each with a stone mason inside who would spend his days with a hammer and chisel, working the stone to create road kerbs, street cobbles, grave stones and the many other granite products the quarry would sell. Three of these granite huts have been constructed as part of the quarry recreation. On special occasions we hope to bring in a stone mason to give demonstrations of how granite would have been dressed all those years ago.

Stone was moved around the quarry in narrow gauge tub wagons. These were pushed by hand, mostly by children as young as 9. A small section of narrow gauge track has been laid and two restored wooden tub wagons are on display. During school group visits today’s children will be able to try pushing the loaded wagons to gain a hands-on feel for what it might have been like for the quarry children of Victorian times.

Demonstration railway sidings have also been laid in the base of the quarry to allow the replica Mountsorrel Granite wagons to be displayed. During the early 20th century over 800 of these wagons transported stone from Mountsorrel to locations all over the UK. Three wagons were restored by local children in 2010, and we have a further two awaiting restoration.

On special occasions demonstration shunting will take place to show how the wagons were marshalled into the trains that transported the goods from the quarry.

The Exhibition Building, adjacent to the Railway Museum, houses display material charting the history of quarrying in Mountsorrel and the restoration of the railway.