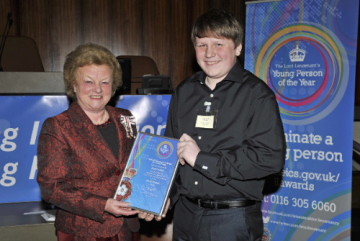 A 14 year-old volunteer who helps with the Mountsorrel Railway Project, was recognised as the Lord Lieutenant of Leicestershire’s ‘Young Volunteer of the Year’. He received his award from Lady Gretton at a ‘Young Person of the Year 2013’ ceremony at County Hall on the 11th April, 2013.
Daniel Bowler from Mountsorrel volunteered with the project continuously over the previous three years. He got stuck in with whatever tasks were thrown at him and often went home with his clothes, face and hands looking more like he had been down a coal mine than at a railway … a clear sign of a hard day’s graft!
In addition to the heavy, physical work involved with reinstating the railway, Daniel plays an important role in our Wildlife Warriors initiative. He designed our “Wildlife Warriors” logo and helps to run the Warrior sessions, which are attended by local children with a different focus each time.
Daniel helps devise the tasks for each event and spent his Easter holidays building over 30 wooden insect hotels to be used by the children during an upcoming Warriors’ event. His resourcefulness meant he obtained the timber needed for these insect hotels as a donation from a local timber yard’s scrap bucket.
Daniel thrives on helping and bringing enjoyment to other people and thanks to his commitment over 150 children have learnt about the wildlife around Mountsorrel.
In addition to this, Daniel helps at 1st Mountsorrel Cubs every Wednesday night and goes on camp with them, helping to cook and serve the meals and helping with activities. Not content with that, he also designed their web site and now looks after it, keeping it up to date.
Daniel gets involved with events and activities at his school, and always volunteers to help at open evenings. He loves all things technical and loves to be involved in school productions, designing the sound and lighting for shows.
Daniel’s huge commitment and enthusiasm to volunteering makes him stand out as deserving of recognition.
You can read about the awards ceremony on the Leicester County Council website.