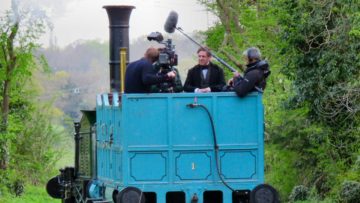 We can now reveal that the Mountsorrel Branch line of the Great Central Railway was used to film the railway scenes in Episode 7 of ‘Victoria’, ‘The Engine of Change’.

October 22nd and 23rd will be your last chance this year to travel the line, so please take the opportunity. Look out for the farmer’s level crossing, which was changed into a temporary platform where Prince Albert, Sir Robert Peel and Queen Victoria herself boarded the train.

Episode 7 will be available to watch on the ITV Hub until early November 2016. The railway appears from around 30 minutes in.