Our volunteers have been hard at work with their £50,000 project to extend the popular Mountsorrel Railway Museum.

The project will enable the current restoration area in the museum to be moved into a purpose built extension, which will double the amount of museum space available for public display of historic railway vehicles. 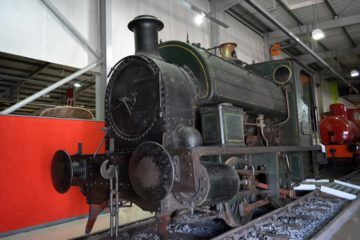 We have been hoping that the creation of extra space and a more professional museum environment will attract more high profile exhibits. The first of these new exhibits has just been announced as the last surviving standard gauge steam locomotive to be built at Loughborough’s iconic Brush works!

The 0-4-0 saddle tank locomotive was built in 1906 as number 314 and worked at Swansea Docks. In 1924 the docks railway was taken over by the Great Western Railway and at Swindon works the locomotive acquired its distinctive GWR safety-valve cover and copper-capped chimney. It was withdrawn from service in 1964 and presented to the Leicester Museum of Technology in 1968, before going on display at Snibston Discovery Park in 1992.

“This is a very special locomotive indeed, because it is the last standard gauge survivor that was built at the Brush works. In heritage railway terms it’s just like having the very last Ford Cortina anywhere in the world and how special that would be. We can’t wait until the loco arrives later this year and the public will be able to see it again. We are immensely grateful to Leicestershire County Council Museums Service for allowing the locomotive to come on loan to the Heritage Centre.”

“It will be wonderful for the Brush locomotive to go on public display again and the Heritage Centre’s railway museum is an ideal venue as its location is so close to the Loughborough Brush works where the engine was originally built.”

The move of the locomotive to the Heritage Centre’s museum is dependent on the completion of the railway museum extension. Steve continued “Work on the extension is progressing very well indeed. The extension is built and the electrical work is going in, but we still have a further £5,000 to raise from public donations to be able to complete the internal fit out. It’s often the final stages of a public appeal that are the hardest to fund raise for as the public think that you are nearly there and don’t need further help! That couldn’t be further from the truth. There are other prestigious potential exhibits in the pipeline if we can raise the final £5,000 to complete the work.”

Details of how to donate to the appeal can be found by clicking here.

Help, In The Press, News