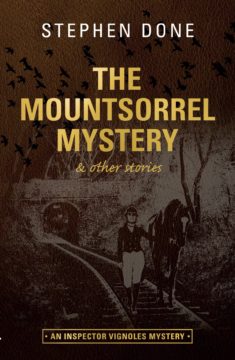 Author Stephen Done will be officially launching his new murder mystery novel, “The Mountsorrel Mystery“, at the Heritage Centre on Saturday 25th March. He will be signing copies of this book on the patio area, adjacent to Granite’s, from 10 a.m. until 3 p.m.

THE MOUNTSORREL MYSTERY
& other stories
INSPECTOR VIGNOLES MYSTERY No 8

From the author of Blood & Custard (set in and around Leicester) and The Murder of Crows ― an eagerly awaited selection of brand new stories featuring Chief Inspector Vignoles and his much-loved colleagues from the British Railways Detective Department as they tackle a varied caseload of odd, baffling and blood-curdling crimes…

In the title piece, a railway worker is found dead beside the Mountsorrel Mineral Railway. It looks like suicide, but could it be murder? The action in this novella is almost all set on the Mountsorrel Railway and quarry, and will appeal to anyone familiar with the newly opened railway and surrounding area.

‘One Way Ticket’ shows a different side to the usually irascible Superintendent Badger as he recounts a perplexing murder mystery from his early years in the force.

Set in and around the former Great Central Railway, these interwoven stories move between 1939 and 1953. Whether speeding towards Dover on ‘The Golden Arrow’, or hurtling through the snowy night aboard the ‘Master Cutler’, this wonderful collection will be a treat for all readers who enjoy a good crime story set against the atmosphere and romance of Britain’s steam railways.

“Well-written and enjoyable series. There are other railway detectives by different authors but for me this is the best.” Steam Railway