Well what a year it has been!

Your support has helped us to achieve so much.

Back in June we asked you to vote for us on the One Family Foundation website. Thanks to your support we finished third out of 169 applicants and received a £5000 grant to help us build three stonemasons’ huts.

Construction of the stonemason’s huts

Stonemasons’ Huts now up to head height
Originally there were over a hundred of these huts around the various Mountsorrel quarry sites each with a stone mason dressing the stone. Boys as young as 9 would have pushed narrow gauge tub wagons loaded with stone to the huts, and the stone masons would have chiselled them into kerbs, cobbles (sets), building stone and various other products the quarry produced.

One of our huts will replicate how the originals would have been, and on certain days we’ll bring in a stone mason to give public demonstrations of how stone would have been worked at Mountsorrel in Victorian times.

The huts are being built from reclaimed Mountsorrel granite that formed the enclosure walls around the Kinchley Lane barn as well as the remaining barn stone. We are using a lime mortar mix recommended by English Heritage to give a finish that should resemble the original huts perfectly.

The huts are being built entirely by our volunteers. Work has started on laying the stone walls and progress has been swift, with most of the walls started, and in some places head high.

Work will continue early in the New Year.

Work on the main building is running flat out. Some 20 or so contractors’ vans and cars arrive at the site each day so you can see what a hive of activity it is. The external stone work is now complete, as is the chimney and roof.

Inside the building plastering is complete and painting is well underway. The timber floor is also complete and the lift is in and nearly finished. Much progress is taking place with the electrics.

The fitting out of the interior of the Heritage Centre should start early next year.

We are working closely with three local heritage groups and societies with regards the design of display boards for the heritage rooms.

The centre is likely to open sometime in April 2016.

Thanks to your kind generosity we reached our Phase 2 fund raising target of £8,500 in September. Thanks also to Tarmac who have provided the majority of the funding for all of the heritage centre site construction work.

Exhibition Building in base of Nunckley Quarry

Inside the Railway Museum

Although work only started on the erection of the museum and exhibition buildings on the 8th December, by the 20th we had two completed buildings!

January will see electrics installed and track laying will proceed for the two sidings that will run inside the museum. 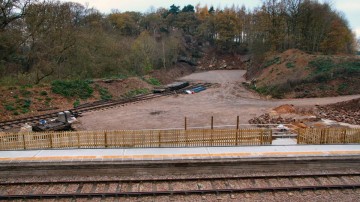 The only remaining item to be added to the station is the name board, which is again being built by one of our volunteers.

The opening weekend of the 24th and 25th October was an outstanding success with every train sold out. Simply phenomenal! What more can we say. If you missed it you missed one of the most inspiring weekends of your life, if you didn’t miss it you’ll know we’re not exaggerating!

As well as the huge amount of physical work, there was also a massive amount of planning that went into the weekend and it certainly paid off. For a new railway, which is a challenge to operate because of the gradients and curves, unfamiliar locos, well over a thousand visitors, unfamiliar train crews, etc, things couldn’t have gone much better.

The only frustrating thing was that we had to cut short the volunteer train on Saturday morning. This was down to steam loco Teddy simply running out of steam at Quorn and the crew having to spend half an hour rebuilding the fire to get up steam again. Little locos like Teddy weren’t designed for the relatively long run from Loughborough to Swithland and Mountsorrel, so the crews had a tough challenge. This also delayed the early train on Sunday as well. Never the less, we are pleased to say that almost all trains over the weekend ran on time.

Reverse Osmosis shed and 12,000 litre water tank
We have always been a project of plan A, B and C with pretty much everything we do, so there is always an alternative if things don’t go to plan. The loco watering was no exception. Thanks to the Leicester City Fire Brigade Museum, plan (A) was a preserved Green Goddess fire engine for the weekend to water the locos. Plan (B) was a hired pump to pump water from several 1000 litre plastic cubes. At Swithland the GCR had a water tank on standby with a further pump (plan C). Whilst all three worked well (all three were used!) we were caught out by the vast amount of water the locos got through. This was due to the steep gradients on the full length of the branch line. The Green Goddess had to shoot off on several occasions over the weekend to fill up her tanks. We have made a donation to the LCFBM as a thank you for saving our bacon re the water.

This has led to a rethink of the water tank we were going to buy for the proper loco water system, which will operate at Nunckley. We have doubled the size to 12,000 litres! A shed and storage tank have been erected for the Reverse Osmosis treatment of water for the locomotives.

Our volunteers worked hard to accommodate all our visitors, however, despite our best efforts, not everyone who came was able to get a ticket and we very much hope that they weren’t too disappointed and will return again next year.

Thank you so much for all the support you have given over the past 8 years of the project. Our sponsor a brick appeal remains open to fund the heritage room display boards, cabinets and other items. The name of brick sponsors will appear on a large commemorative plaque on the inside wall of the heritage centre tea room. Bricks cost £50 each and can be sponsored in your own name, your family’s names, as a present or in memory of someone who has passed away. If you would like to sponsor a brick details can be found at http://heritage-centre.co.uk/donate/. A full list of our supporters is available.

We will be having a well earned rest over the Christmas holidays as we end what has been a very successful year. We will see you in 2016 when there will be even more to achieve and celebrate. There is always plenty to do for everyone to get involved and we welcome new volunteers all the time so please do come and join us. If not we hope to see you around April for coffee and cake, or one of our many other delights, when the Heritage Centre coffee shop opens.

We will keep you posted about the official opening.

In the meantime why not take a few minutes to watch our video round-up of the year.

Have a very happy and healthy new year.